We use a TABLE request to write this data to a different RDBMS table with the same primary key, but we're getting PK violations because of duplicate keys!

What turns out to happen is that WebFOCUS trims the trailing spaces off these values, and this creates duplicates! Is there some option to turn off this behaviour?

To illustrate the problem, say we have an Oracle table:

WebFOCUS grouped the two different values for FOO as if they are the same. But they're not!

Now you can imagine what would happen were we to HOLD these results to an RDBMS table with the same primary key...
How do we differentiate between the two values?This message has been edited. Last edited by: FP Mod Chuck,

MartinY
And what if you define the FOO USAGE as A18 instead of A18V ?

Or can you create another "dummy" FOO field only to be used as in the key where you will replace the trailing spaces with something else ?
Something such as (or anything else with combining other function)

Wep5622
Those were actually things I had already tried (I could have mentioned that...). Still, thanks for the suggestions.

Changing the field definition to USAGE A18 adds MORE trailing spaces than in the original value, I end up with:


I also tried replacing the trailing spaces with something else, but then WF just fills up the remainder of the length of the field with the replacement character.
Worse, it does the same to 'FOO' (the variant w/o the trailing space)!

And I now also have to replace the replacement character back to a space in the target table somehow... Ooph!

And finally, since either solution would do the same to either 'FOO' or 'FOO ', I would still get a duplicate key violation in the target table.


Let's see if I can ignore those values with trailing spaces, they're probably user input errors in the first place... I'm replicating data though, so that's a somewhat dubious decision to make.

MartinY
My suggestion regarding FOO_K was to add this new field as element for the key
So, instead of having only FOO as key you will have FOO_K and FOO


So, using both fields where COUNTRY_K is in a BY but NOPRINT create twos rows for England & Italy

Doug
Have you tried: ?
Where PRINT can be SUM and A3 can be A(any number)

Wep5622
I'm pretty sure the underlying problem is that WebFOCUS apparently does have no concept of an alphanumeric field with values that contain trailing spaces that are not padding the field value to the full length. I would appreciate being proven wrong here.

If that is indeed the case, there is no way to fix this from within WF, as there is no way that WF can distinguish the two different values from each other, no matter how much you fiddle around with An and AnV fields.

To WF, 'FOO' and 'FOO ' in an A5 or A5V field are the same values, namely twice 'FOO ' (A5) and 'FOO' (A5V) respectively. The distinction between 'FOO' and 'FOO ' is lost as soon as WF reads the value into its matrix. That the value is written to another RDBMS (that does understand this distinction) immediately, does not seem to matter.

I was hoping for a setting somewhere to make WF keep the original value instead of either trimming off the trailing spaces or padding the value to the full field length, both of which change the value.

A possible workaround would be to also read the LENGTH() of the value from the RDBMS (using DB_EXPR) and write the output to a staging table in the target DB. After that we can construct the value back with an SQL query there using substring on the value with the given length, but holy flying spaghetti monster!

Frans
Would it be an option to store it as a hex string instead of ascii text?

quote:
...WebFOCUS grouped the two different values for FOO as if they are the same....How do we differentiate between the two values?...

Within the TABLE FILE construct maybe try something like this? 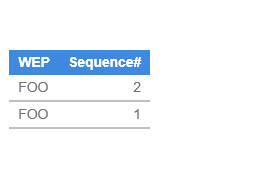 Department is a table in the AdventureWorks2017 MS SQL Server sample database.This message has been edited. Last edited by: David Briars,

Wep5622
Those are some interesting results...

It appears that the trailing spaces don't get lost until I write the value to the target DB using FORMAT SQLPSTGR.

I can insert a record straight into the database that does contain trailing spaces though, so it is still something that WF is doing.

Could this be adapter-specific?
It doesn't appear to be something configurable on the adapter, unfortunately.