Focal Point
[SOLVED] Enter List in Dropbox for Table Insert
This topic can be found at:
http://forums.informationbuilders.com/eve/forums/a/tpc/f/7971057331/m/9987020196
Tim A
[SOLVED] Enter List in Dropbox for Table Insert
I need to allow users to "drop" lists of bill numbers in an htm web text box, and hold them i n a file to use for multiple applications. However, i can't seem to accomplish this using a set statement or single character string. Any ideas? I don't know how to create a text file upload either.This message has been edited. Last edited by: FP Mod Chuck,

BabakNYC
1. What release/gen?
2. What tool set? App Studio, InfoAssist?
3. Can you provide a very specific use case? From what you've described you'd like to create some kind of a HOLD file. The syntax for that is ON TABLE HOLD AS filename FORMAT ALPHA but a more detailed description of your requirements will help us give you more concrete advice.

Tim A
Thanks for the help, I am using WF 8.1 with Application Studio.

I'll actually be updating a DW table with the end results, and don't really need help with that piece. However, I have hit a wall trying to figure out how to format a list of bill numbers input through a WF .HTM test box to use in an SQL where statement with single quotes and commas.

I've created a htm page with a test box and input a list of bill numbers as below as &BIL_NBR with the intent on figuring out how to reformat this into a where statement.

Runs fine with one bill number entered, but a list of 4 bills pasted in, or entering single quote and commas in the HTM edit box will obviously not process.

My ideas were to
- reformat the htm text box to accept commas and single quotes
- read a pasted list using a loop in the fex running the sql
- As a workaround - learn how to incorporate an upload text file into my htm page (this would not allow tableizing the bill numbers, but ok for auditing)

Can you show what &BIL_LIST contains once the user enters the values (before reformat)? It sounds like all you need is a way of separating the values with ',' in a variable.

Tim A
I think we are in business. I re-created the htm using a text area instead of a text box, and now it runs the bill numbers together on one line.

I'll have varying volumes of bill numbers entered (in this case 4) up to thousands. Is my only option a variable loop to edit this?

Hallway
In the properties of the text area, make sure that you have the Multiple property set to Multiple and Multiple:Add quotes set to Yes. 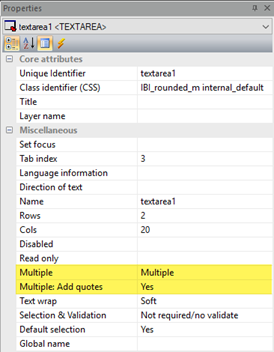 
Then in the fex with your variable in it, change the ' OR ' text to a comma with this:


That will change the variable value to this:
This message has been edited. Last edited by: Hallway,

Tim A
Outstanding, this solution works well
Thank you!!!
Tim A

Don't forget to add '[SOLVED]' to the front of the subject line of your post if it solved your issue.